The Regressor and the Blind Saint Chapter 3

Five days, or perhaps even more, had passed.

I thought I was going to die that day after the first diagnosis.

Vera smirked at the sight of himself still breathing.

I hate to admit it, but Renee’s treatment and care worked.

She even reduced her own portion of the meal, preventing him from starving to death by feeding him a portion of her food. And her divinity, which she collected by gathering the vestiges of her lost power, slowed the decaying of his life.

However, that was it.

“The situation is improving. Let’s try a bit more.”

Renee said. At that, Vera turned his head toward Renee and uttered an answer.

“Nonsense. It’s just that my lifespan has gotten a bit longer.”

Yes, his lifespan just got extended slightly. It was just that.

The wound still hadn’t healed. The pain was getting worse by the day.

The injuries, which had gradually worsened over the past week, had now taken away all the strength needed to even move his fingertips.

“How about acknowledging it now?”

“You worked in vain. I will die soon.”

Renee shook her head with a smile on her lips as Vera said that with all of his strength.

“Even if you say that, nothing will change.”

“You will never know unless you try your best.”

It was the same repeated answer.

Her persistence made him feel so pathetic.

“You are a foolish person.”

“It’s called being full of love.”

“You don’t like losing in a war of words, do you?”

“The desire to win is a good stimulus for development.”

He wanted to let out a sigh, but the pain throbbing through his entire body made breathing difficult.

“If I was fine, I would have slapped your cheek.”

“That’s a good mindset. I will wait for you, so hurry up and recover.”

Renee said that while leaning against the wall next to Vera, who was lying down, then took out her Rosary.

A platinum-colored rosary that stood out as a precious commodity at a glance.

It was the mark of the high priests of the Holy Kingdom.

She always held her rosary and continued praying whenever she had time.

One day, I asked her what she was praying for, as she never seemed to be getting tired of it.

The answer at the time was that she was praying for his recovery. It was a hilarious wish, one he would not make in her shoes unless he was an idiot.

Vera spoke involuntarily, recalling his past and seeing Renee pray with her rosary in hand.

“… That rosary, if you’re not going to throw it away, you’d better leave it here.”

“You’ll die because of that rosary.”

Vera looked at Renee, who still had her eyes closed, and said so as if affirming.

It was bound to happen in the slum.

They were called so because if they found anything valuable, they would rip off and sell it, even if it was the organs of corpses.

If they were to find that Rosary, Renee would become their target immediately.

Those scoundrels would pierce Renee’s neck with a knife to kill her, and after taking the Rosary, they would split her stomach to extract all of her organs and sell them as well, and only then would they be satisfied.

“Scavengers are a bunch of lunatics who live only for today. If they were given a chance to earn money for today, they would even risk being pursued by the Holy Kingdom to steal that Rosary.”

After talking for a long time, his chest started hurting again.

Vera was breathing heavily in response to the pain surging through his body, then frowned immediately.

He didn’t know why he brought it up. He couldn’t understand why he was being so nosy.

Did I finally go crazy now that I’m a step away from death? He was immersed in such a thought.

The answer came back.

After saying that, Renee opened her eyes and continued speaking again with a small smile on her lips.

“They must be living such a harsh life if they have no choice but to do such a thing.”

“Huh, if Carrick had heard that, he would have laughed and fell backwards.”

“Oh, it turned out to be a well-known individual.”

“Well, you could say that.”

He was the one who created the deep darkness of the slum, so it wasn’t really wrong.

“They aren’t worthy of sympathy.”

“Is there such a person in the world?”

“You live in a flower garden.”

“I can’t see it with my eyes, so I have to visualize it in my head.”

He had never lost his calm throughout his miserable life, but whenever he talked to her, he always felt like he was being dragged around.

Seriously, she was a person who looked more like a weirdo than a Saint, no matter how much he thought about it.

Since she brought him here, she never once asked about him.

Not even the most basic thing like a name was asked, let alone his identity or his past.

If it was because she was not interested in him, that wouldn’t make sense either.

She devoted almost all of her time to caring for him and showed no signs of fatigue or annoyance.

She held his hand and talked to him whenever he felt like he was going insane from the pain, and despite being unable to get even one meal a day for herself, she took care of his meals.

It could be said that it was the Saint’s magnanimity, but to Vera, it came across as bizarre rather than magnanimous.

Vera let out a deflated laugh.

To tell the truth, he’d rather not think of it as nobility, so he justified it that way.

Even though they both lived miserable lives, her unwavering light was so bright that it made him aware of the filth he was covered in, that was why he justified it that way.

He was ashamed of his past, in which he had lived as a villain among villains, and felt insignificant under her light, so he disparaged her.

She was so dazzling that she could accomplish things he couldn’t in the past.

At the end of my life, I thought there would be no one left by my side.

He had lived a life too ugly to deserve anyone beside him on his deathbed, so he didn’t even dare to hope.

He swore that he would humbly accept dying alone, but her light was capable of weakening even his resolve.

She showed him such kindness that a repulsive human like himself would have refused.

Vera laughed at himself for leaning on her warmth.

His gaze followed her.

… He examined her face and her vacantly closed eyes.

A bizarre face scarred by burns and whose original form couldn’t be recognized.

Vera attempted to draw the face she would have had on it, but it was difficult because it was so terribly damaged.

“Did you do that to your face?”

“What are you talking about?”

“Did you have any reason to do that?”

As Vera waited for her answer, Renee replied with a chuckle.

It was a tone with a touch of playfulness in it. 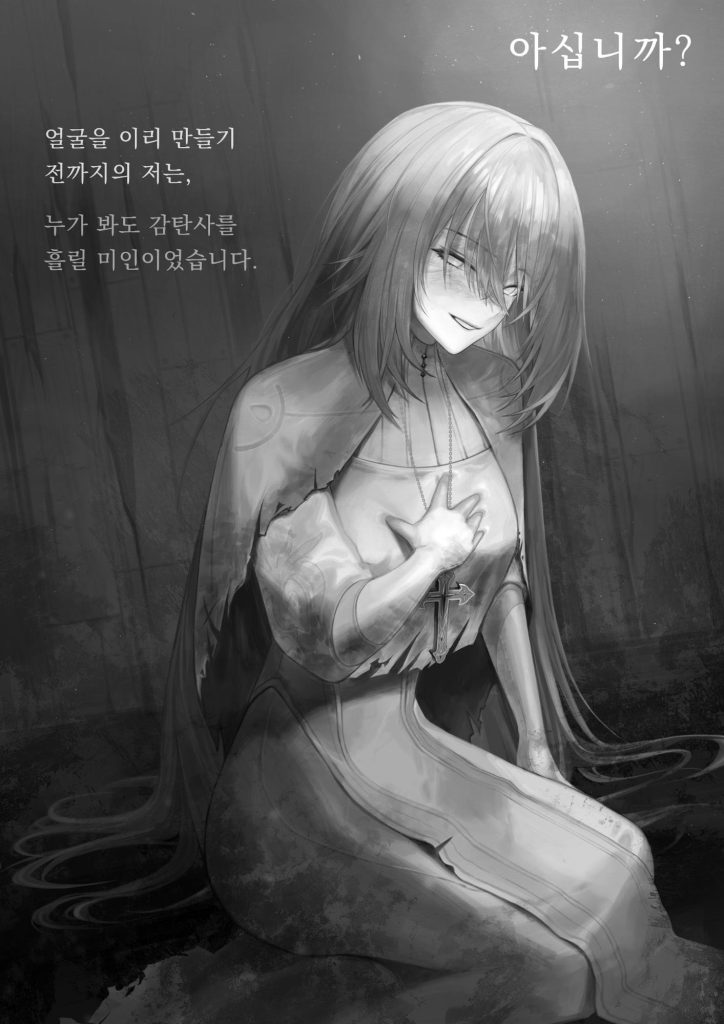 “You know? Until I scarred my face, I was a beauty admired by everyone.”

It was a sudden remark, but Vera was able to understand her intentions with just those words.

Vera knew better than anyone that a beautiful appearance served as a fatal weakness in the slum.

She must have wanted to say that it was a choice to protect herself.

“… How can a blind person be so sure of that? Don’t you think the people who saw you had no courage to call you ugly?”

Vera spouted out his harsh retort because he was so disgusted by her words.

What followed was also a laughable answer.

“I am telling the truth.”

“Do you know what it means to be blind?”

Renee said and leaned towards Vera. Renee’s hand was overlapped with Vera’s. 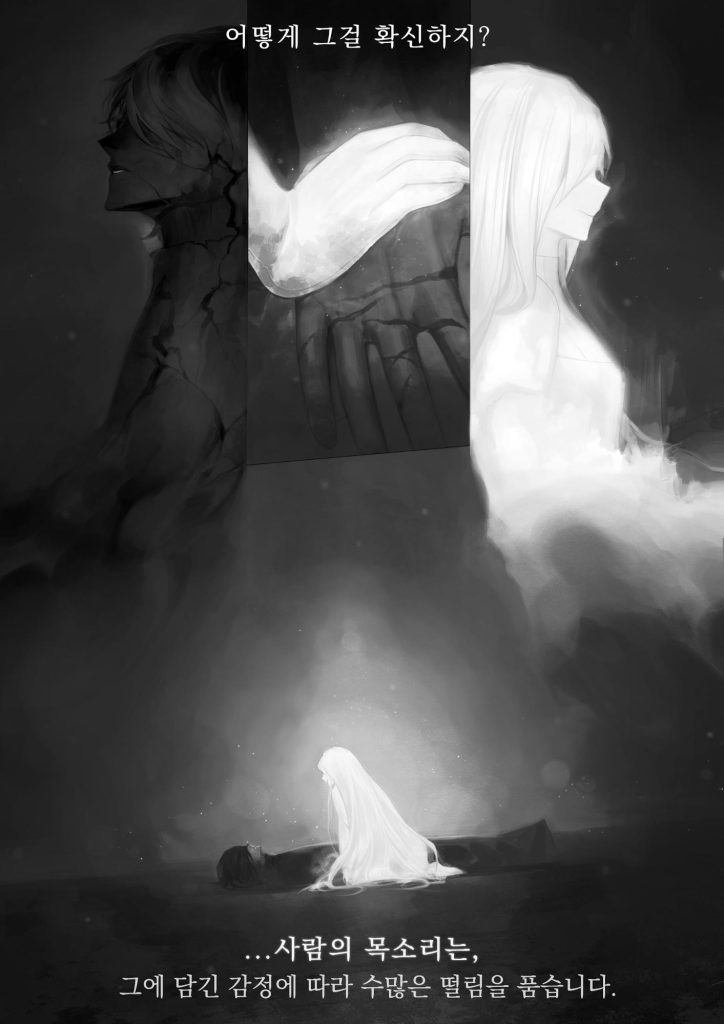 “It means being sensitive to other senses. I can understand better than others whether the words conveyed by a person are true or false.”

Renee’s hand swept over the back of Vera’s hand.

“The human voice has a lot of vibrations depending on the emotions it tries to convey. When you tell a lie, there is a tremor that shows hesitation, and when you tell a touching story, it gets tightened in unshed tears.”

Renee’s hand, which had been stroking the back of Vera’s hand, began to press the pulse gently on Vera’s wrist.

“Sometimes there is a pulsation. The more intense the emotion, the more evident it becomes.”

“… Why are you talking about it now?”

“It was because almost everyone who looked at me had a passionate voice when they talked to me.”

“Don’t you think that you are just being overly self-conscious?”

“No way. I’m certain. The tremors in the voices of those who told me that I was beautiful, and the heat that came along with it, each contained a hazy hue. There is only love, as far as I know, it’s a tone with such a vivid color.”

“Everyone who saw you fell in love? Aren’t you ashamed to paint your face with gold?”

Vera felt a smirk coming out of Renee’s face as she said it without any shame.

“That’s enough. I asked you a stupid question.”

“It’s a pity that there is no way to prove it.”

Renee’s hand, which was holding the pulse, fell off, and the warmth that had permeated Vera’s wrist disappeared.

Vera, feeling the sensation of emptiness, exhaled briefly, then shut his mouth tight.

As the body weakens, does the mind also weaken?

Vera felt that the emotion he had just experienced had harmed his pride.

To feel regret from the departing warmth, he must have lived a life in which he had asked no one for help. This weakness sprouted within him for some reason when he dealt with her.

His shallow imagination kept coming up with meaningless assumptions in his mind.

A never-ending chain of assumptions. As a result, Vera felt his stomach churn again and shook it off by biting his lips.

It was because of the growing misery following those rising assumptions.

It took a while for the silence to settle, in order to shake off those trivial thoughts.

Vera hesitated and sat up, looked at Renee as she staggered against the wall, and uttered those words again.

“You’d better leave the Rosary behind.”

“How could I ever do that?”

It was a word of rejection that came back.

Vera looked at Renee as she walked slowly away from him, feeling suffocated and unwilling.

As a result, he uttered unnecessary words.

“… I guess the prayers you’ve been praying for the whole time must have been a prayer for someone to kill you.”

“Please. I’m not going to die until you get out of bed.”

Renee said that, opening the door of the shack with ‘creak’ and went outside.

Words in the usual calm tone, as always.

Those were Renee’s last words that Vera heard.

Wanna read ahead? Buy coins here. You can unlock chapters with coins or rather “genesis orbs”.

You can support us by reading the chapter on the Genesis website, and also by becoming an exclusive member.

You should check out the illustrations on our discord server: discord.com/invite/JnWsEfAGKc

You can rate this series here.

The Regressor and the Blind Saint

The Villain Who Robbed the Heroines

not work with dark mode
Reset
We use cookies to ensure that we give you the best experience on our website. If you continue to use this site we will assume that you are happy with it.OkPrivacy policy